Posted by GoldenEto Posted on 4:14 PM with 9 comments 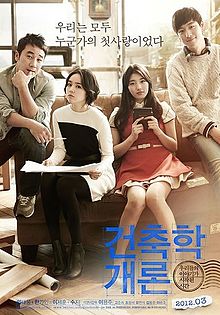 SYNOPSIS :
Seoul, the present day. Out of the blue, architect Lee Seung-min (Uhm Tae-woong) is approached by Yang Seo-yeon (Han Ga-in), whom he knew at college some 17 years ago, to design a new house for her on the site of her 30-year-old family home on Jeju island. Seung-min reluctantly agrees but can't come up with a design that pleases her. In the end, they decide to renovate and expand the existing house, and he and Seo-yeon spend a considerable amount of time together down in Jeju, to the growing annoyance of his fiancee Eun-chae (Go Joon-hee), with whom he is soon to be married and move to the US. As Seo-yeon cares for her dying father (Lee Seung-ho) and Seung-min learns more about what became of Seo-yeon in the intervening years, he recalls their initial meeting at college in the early 1990s. Seung-min and Seo-yeon (Lee Je-hoon and pop star Bae Suzy) had lived in the same neighborhood and attended the same architecture class. He remembers her liking for rich student Jae-wook (Yoo Yeon-Seok), his inability to declare his attraction to her, and the times being coached by his best friend, Nab-ddeuk (Jo Jung Suk), in how to get girls


Subtitle is made specifically for members only www.islandsubs.com Appreciate the translator working with had no repost, re upload or make hardsub this subtitle. Be sure to real RULES of www.islandsubs.com. Thank you.