Posted by cajuputte Posted on 6:18 PM with 7 comments 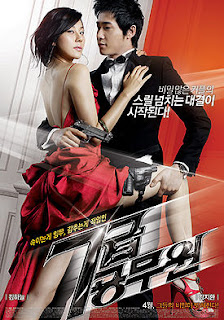 Secret agent Ahn Soo-Ji (Kim Ha-Neul) works undercover as a bride-to-be real estate agent. Her real life boyfriend Jae-Joon (Kang Ji-Hwan) is completely distraught over Soo-Ji’s frequent absences and even harder to believe excuses. Jae-Joon then decides to leave her and for that matter the country of Korea itself. He calls Su-Ji one last time at the airport Incheon International Airport, but unfortunately Soo-Ji is unable to answer his call because she is working undercover to bust an international crime organization.

Three years later, with Jae-jun long gone, but not forgotten Soo-ji works on a Russian mafia case involving biological weapons. During her undercover work, Soo-Ji poses as a janitor and runs into Jae-Joon while cleaning the men’s restroom. Soo-Ji completely loses her composure and attacks Jae-jun for leaving her and apparently lying about his whereabouts.

Meanwhile, Jae-Joon has his own secrets. Jae-Joon is also a secret agent, but works in a different department from Soo-ji. When Jae-Joon left Korea three years ago, he was actually assigned to track the very same Russian organization that Soo-Ji is currently working to bust.

Now that the former lovers have met again they resume their romantic relationship, while trying to keep their real identity unknown to the other person. They also have to stop the Russian mob from gaining a weapon of mass destruction ...

Subtitle Indonesia My Girlfriend is an Agent